EMOTIONS - The Power of Dance 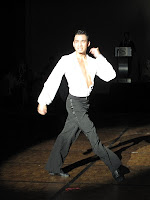 Professional Carlos Chang presented his second Showcase – “EMOTIONS – The Power of Dance” on Saturday March 20 at the Sheraton Waikiki, Hawaiian Ballroom.
I attended with Shari Berinobis, Hawai’i Star Ball’s Mistress of Ceremonies, who declared it to be the best Showcase she had ever seen in Hawaii – and I had to agree. I have spoken to several other attendees and they also agreed that this Showcase was one of the best that they had attended.
In my opinion the $85 admission was a very small price to pay for such an innovative event. I think that Carlos Chang has really lifted the bar as far as producing a Showcase with an excellent program.
Why? Well, first of all, for me, the event was held in the newly refurbished Hawaiian Ballroom at the Sheraton Waikiki which used to be the home of the Hawai’i Star Ball. The Ballroom, while it has lost its Hawaiian flavor was elegant. The Buffet was beautifully presented and was first-class. The service was excellent. There must have been around four hundred very friendly attendees with many new faces. The printed souvenir program for the event was around forty pages and each page was in full color and included a full page for each performer in the Showcase. The ballroom had a very simple stage with two podiums for the two MC’s separated by an arrangement of white orchids. In front of the two podiums was a low platform. At each end of the Ballroom was a large projection screen which showed the performances. 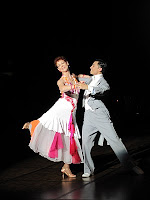 After the dinner we were treated to a performance by the Kenny Endo Taiko Ensemble. They then performed for Carlos's brother Alfonso Chang and his father Carlos Chang Snr. who gave a traditional Chinese Lion Dance. Then they picked up a Samba beat to which Carlos and his Student Yulia Sharipova danced. Later in the evening Carlos’s friend John Pang took the low platform in front of the Podium and played a violin while Carlos and student Yulia danced. 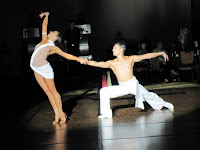 John also played for Carlos and professional Debra Borges-Barboza who dance a delightful American Style Waltz. Adriana Chang, Carlos’s sister played her guitar while Cheri Nakamura sang and Carlos and professional Jessica Starr danced a Rumba. Another novel feature was when Carlos performed without his shirt! All of this was pure theatre and made for a very diverse and innovative evening.
The actual showcase was danced in three parts with twenty one performances with Carlos featured in fourteen of them. Everything was spot on and ran smoothly.
Nine year old Nikki McCormick danced a Cha Cha Cha that was well rehearsed and later on a Jive that was sassy – this young lady has lots of potential.
Janet Liu danced her first showcase with Carlos (Samba) and is looking forward to competing on the Mainland – she must understand that the accented beat in the Samba is on the 2nd beat.
Michiko O’Connell danced a Rumba and is looking forward to also dancing in Scholarship divisions on the Mainland – she must improve her balance and weight changes.
Cheri Nakamura danced a Jive with really good rhythm and lots of personality but must watch her Jive Chasse action.
Edwin and Charlotte Bugarin performed a Cha Cha Cha. One of our top amateur Latin couples. Their solo work was together but I would like Charlotte to project more to the audience and not keep looking down.
Friends of the Ala Wai performed an interesting formation of six couples with good changes of pattern. I hope they will perform for us at the 2010 Hawai’i Star Ball.
Jared Bugarin and Arielle Magpoc danced a Cha Cha routine incorporating traditional Cha Cha, Jazz, contemporary, Break, and Hip Hop. Excellent dancing with lots of potential.
Next a Cha Cha routine by Carlos and student Patty Haft. Patty gave a very professional and experienced performance which was well rehearsed but I felt her Cha Cha Latin action was not convincing, it seemed to me too manufactured.
Greg Henry performed an International Rumba with lots of confidence. (I was not impressed with his choice of clothing). Emi Matsuoka was a little nervous doing her first showcase but she looked beautiful and did well, but,  heel leads in Rumba?
Ria Baldevia is turning out to be a real “diva”. Her Cha Cha was a real crowd pleaser – good work.
Ashton Blanton and Kate Tyumentseva then danced a Jive with good basic recognizable figures and a good basic action.
Keoki Galas and Kim Suenaga danced a Samba with lots of enthusiasm with Kim showing a good basic action. Keoki needs to understand that the 2nd beat of the Samba is the accented beat and he really must stop looking down.
Terie Nakayama danced a Cha Cha Cha with interesting choreography but heel leads are not acceptable!
The only Paso Doble of the evening was danced by Tsubaki Nakamura with Carlos. While I was impressed by syllabus figures of Twists, Spanish Lines, Fregolina, and Syncopated Separation I felt that Tsubaki needed to show a stronger body, foot and leg action for this dance.
Finally Yulia Sharipova who danced several numbers with Carlos. She is becoming a consummate performer. She is beginning to loose that balletic look and becoming more of a Latin dancer. However I would like to see a lot more emotion between them both. Isn’t that what this showcase was all about “Emotions – The Power of Dance” 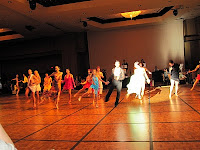 Posted by Geoffrey Fells at 4:01 PM