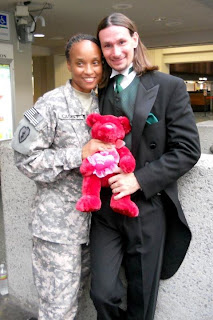 A SOLDIER COMES HOME...to a flash mob waltz, danced to the tune of the Blue Danube played by a String Quartet

The Vision: Producers of Lifetime Television had a vision for a reality show. An unusual, even spectacular, but touching story of a husband's welcome for his wife, a soldier, a Major in the US military, coming home from her 2nd tour of Afghanistan.

The troops from Afghanistan will arrive at Honolulu airport on a military plane. Major Elizabeth Casely, after her more than 24 hour flight home, will step off the tarmac, escorted past the USO office, up the escalator and voila....into the arms of husband Chris Casely, fully clothed in his formal tail suit, pacing and anxiously awaiting the arrival of a wife he hadn't seen in months, a wife whose safety he had worried about, a wife he had longed and pined for, a wife whose duties to her country
commanded personal sacrifices of life and death, and separation from home.... There on the top of the escalator stood a jittery husband relieved that his wife is "coming home..."

There was the sweet reunion, the kissing, and the embracing, the sighs of relief and finally the husband says to his soldier wife, "May I have this dance?"  This was our cue to begin dancing our waltz to the tune of the Blue Danube played by a  string quartet. Husband whips wife into his arms, he in tails and she in army greens, and swept her into the world of a grand ballroom in Vienna, except this was the Honolulu airport!  This was the flash mob waltz that we were a part of, a routine we had been taught and rehearsed just for this moment!! Finally it came and we were all exuberant in our dancing!!! It was like riding a merry-go-round and not wanting to get off the ride!

The show will be called "Coming Home," scheduled for airing in December 2011 by Lifetime television channel. Tune in!

The Preparation, Rehearsing and Filming of Coming Home:

Out of the clear blue, about 2 months ago, an email from a good friend, and a call from the soldier's husband, Chris Casley asking if Paul and I would be interested in being a part of
"Coming Home."  Wow, I thought what a really cool thing! I don't know why but I suddenly had visions of being Marilyn Monroe, welcoming home our troops! A silly thought but I did have a wave of this vision...except I played Marilyn Monroe! Yes, what a fanciful thought! It tickled me thinking of it, and made me very excited about the whole thing. I thought what a life experience this would be, and how fun and how it would allow me to dance, dance and dance,  something I totally LOVE to do! And what a privilege, to pay small homage to our soldiers who give their lives for us so that we can live so comfortably, so that we can dance.

I found out a little later that similar calls were made to our dance instructors Lucas Jaime & Yanna Samkova, to Geoffrey Fells, to some Arthur Murray folks, as well as others from HBDA and Honolulu's Salsa circuit. It was such a nice variety of dancers recruited from different "walks" of dance!
One thing though, we were all sworn to secrecy, not allowed to talk about it, didn't even know who all the other dancers were until the rehearsals began a few days before the flight arrived. 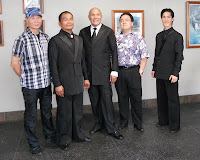 Without giving out the rest of the story and all the details which I will leave for you to tune into in December when the show airs, I would however like to share some photos taken by good friend and patron of Hawaii's dance community, Mary Beth Van Hoogstraten who played the part of a grandma traveler in her polka dot dress and laden with teddy bears. 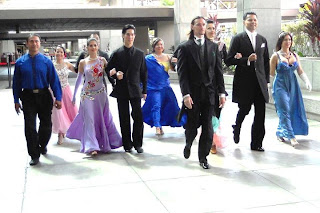 The filming by Lifetime Television's crew flown in from L.A. was at Honolulu airport last Wednesday, on August 31st. 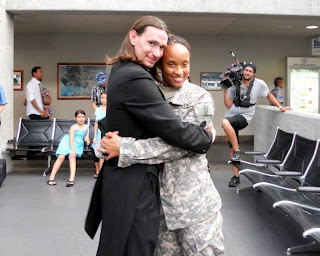 Posted by Geoffrey Fells at 3:22 PM